A Journey to the Cactus League 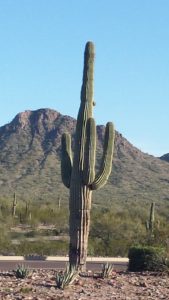 In early March, Marian and I hitched up the wagon via American Airlines and headed to Arizona for time in the sun, a little baseball and some relaxation. A new experience for both of us. We’ve never vacationed in the land of the sun, but we came to enjoy the warm weather with temperatures reaching up into the 80’s and 90’s. Phoenix is quite a popular destination this time of year with considerable traffic at the airport as well as the freeways! People were very friendly, hospitable and tan. Guess that would be characteristic given the high volume of sunshine. Rather uncharacteristic for a couple of white washed northeast Ohioans where you get one day of sun per month from November through April and nearly everyone needs to consume 1000 mg of Vitamin D each day to keep your doctor happy. One element about the people in Arizona that was quite noticeable, however, was that the age range tended to be very highly populated by members of the half century club. That was a new experience for us!

The Cactus League plays baseball from late February until the end of March. Sixteen major league teams play their spring games in Arizona with two of my favorite teams, the Cleveland Indians and the Kansas City Royals participating. It was quite a treat to be able to see them play. Although the games don’t count, the games are competitive with most players competing to try and make the major league roster. The teams also house the players from their “farm teams”, the minor league teams that serve as their development program for the majors. Enjoyed visiting one of the morning practice sessions for the Cleveland minor league players. There were up to 200 players there that morning all dressed up in their polished uniforms; it was quite impressive. It brought back memories of playing baseball during my teenage years. You could see the excitement and hope in the faces of these young men as they wholeheartedly worked with all of their capability to make a good impression on the coaches. In a highly competitive league, most of these players will not make it to the majors. Yet, they were giving it their best shot; an effort to be applauded.

In attending many of the baseball games, several people associated with a particular team wore T-shirts that stated, “Train to 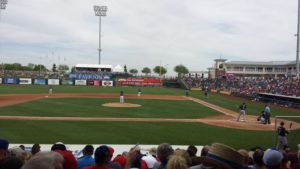 Reign.” An appropriate theme for training camp obviously. Competitive sports serves as an example of the importance of “training.” The difference between those teams that are able to perform at the very highest level is ever so slight. The emphasis on the fundamentals of the sport and the time invested in training generally make the difference for the eventual “winners” who reign. The parallels of this principle to the Christian life were evident while reading through Romans 5:17 one morning. Those who receive the gift of righteousness will reign in life through our Lord Jesus Christ. In becoming a Christian, we begin our walk with Him as a “rookie” in camp. We are on the team but our training has just begun. Fortunately, the Lord has given us a playbook, the Bible. II Timothy 3:16 is a good verse to have memorized. It summarizes that God has given us His word to teach us, correct us, even rebuke us when needed, but also to “train” us. Transitioning from a rookie to a veteran in the Christian life doesn’t happen overnight. It generally takes considerable time; an investment in God’s word along with a desire to put it into practice in one’s life. In so doing, one moves from being a rookie to a veteran. And in the Christian life as well as in baseball, veterans help rookies in making the journey.

While on vacation unexpected encounters sometimes take place that can add a bit of encouragement along the way. During a trip to Camelback Ranch Stadium in Glendale to watch the Chicago White Sox and the Indians play, we needed to purchase tickets at the stadium since we had not done so in advance. The young lady at the ticket counter made my day when she asked for my identification to prove that I was old enough to qualify for the Senior Saver rate on the tickets!   No offense was taken, of course. Gifts sometimes come in small packages.  Another chance meeting took place at the hotel where we were staying. My regular routine, since my internal alarm clock goes off early in the morning, is to head to the lobby to grab a cup of coffee and have my Quiet Time. On occasion it’s not so quiet if it’s crowded, but sometimes it also brings along the opportunity to meet someone new. That happened on this trip as *Bill, a man in his 40’s, stopped by my table when he saw me reading the Bible to ask where I was reading. That morning I was in the book of Romans and as our conversation went further, he indicated that he was there that week to minister to one of the baseball teams. A former professional major league baseball player in his earlier days and now a pastor of a church, he takes about 3 to 5 days a month to minister to the team. Blessed with a supportive church, a team with a supportive executive leadership, and a supportive family, Bill has the opportunity to speak the love of God into the lives of these young men during perhaps one of the more challenging times in their lives. Amazing how God works to provide a godly man at the appropriate time and place.  As a former baseball player, he relates well with the players and knows the challenges they are facing being far from home. He shared a small piece of his own personal story of his early days as a baseball player and a new Christian. Like a “fish out of water” in a world without familiarity, Bill was looking for help from someone who could help him grow in his faith. At that time, God brought an unlikely man across his path. A man whose appearance would not lead you to believe he was a Christian. His visage would tell you that he had lived a hard life, having spent his time on those activities that take life away rather than build it up. This man whom God had redeemed from perdition, offered to help him. Having no other options at the time, he said “yes”. In the process, this man introduced Bill to the three R’s. Similar to the basics of reading, writing and ‘rithmetic, Bill was trained in reading, researching and remembering the word of God. He got him into the word of God which is exactly what he needed. Reading it daily, researching (studying) the Scriptures to understand what they meant and how they applied to life, and remembering: learning to memorize the verses. After about 6 weeks Bill realized his life was changing and he was headed in the right direction. Gratitude is perhaps the best way to describe Bill’s countenance as he shared his story. Extremely grateful to God for this man, this veteran, who invested in him when he was a rookie in the Christian life. 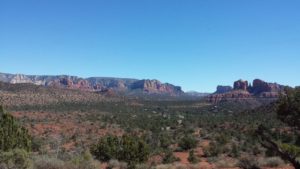 The Journey to the Cactus League was a wonderful adventure. Lots of baseball, warm weather, beautiful country, and meeting some wonderful people. “As iron sharpens iron, so one man sharpens another” according to the book of Proverbs, and I experienced some sharpening during this trip. That’s always a good investment.

*Not his real name.